An allograft, which was individualized into a precisely fitting bone block by CAD/CAM technology, was utilized for maxillary bone reconstruction. Six months after block insertion, an implant could be placed in an augmented alveolar ridge. The block’s volume and successful application were verified using a 3D matching software.
After initial resorption, the bone volume showed long-term stability (6 years follow-up) following loading of the implant. Furthermore, 3D matching was a suitable quantification method to analyze the volume development of bone augmentation.

Today, cone beam computed tomography (CBCT) data sets allow the generation of three-dimensional (3D) digital models and the 3D visualization of the defect morphology. Thus, individualized allogenic bone blocks that fit precisely into the morphology of the defect can be designed by means of the computer-aided design/computer-aided manufacturing (CAD/ CAM) technology.
The purpose of this research was to report a clinical case of an individualized allogenic bone block whereby the successful osseointegration and volume development were precisely quantified by a 3D matching software and confirmed by a long-term clinical follow-up.

A 37-year-old fit and healthy man (medical history was unremarkable; non-smoker) presented to a practise with a symptomatic left maxillary incisior. The tooth had failing endodontic treatment despite apicoectomy which were done 15 years prior (Figure 1).
Together with residual periapical infection, the tooth was given a poor long-term prognosis, and thus, extraction was the treatment option chosen by the patient. 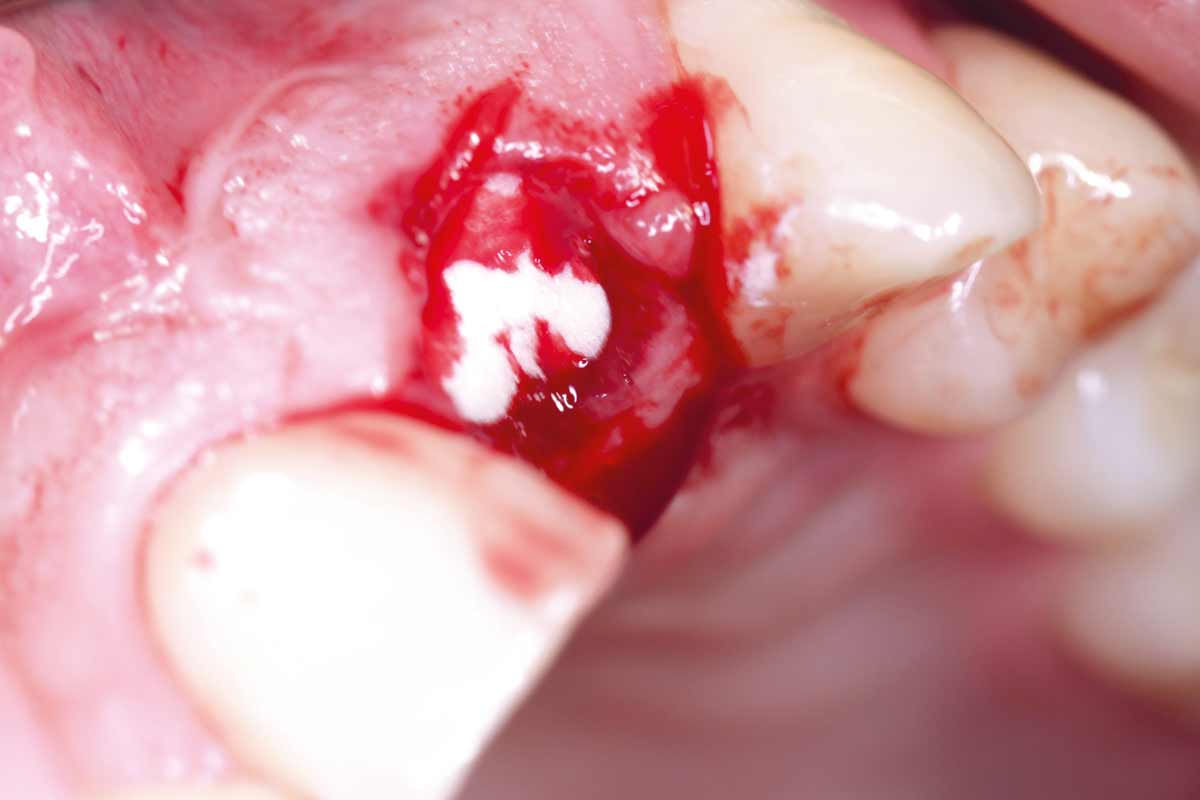 The patient wished for an implant-supported prosthesis to restore an esthetic appearance. After a healing period of three months, a clinical and radiographic examination of the anterior maxilla was performed, which revealed a severe osseous defect that necessitated alveolar ridge reconstruction prior to implantation.
Treatment with a CAD/CAM manufactured allogenic bone block was chosen (maxgraft bonebuilder, botiss biomaterials GmbH). The origin of these blocks were femoral heads from living donors obtained during arthroplastic surgery carried out in accredited clinics and then transmitted to a tissue bank (Cells+Tissuebank Austria (C+TBA)).

CBCT scan (No.1):
After a healing period of three months, a baseline CBCT scan was taken to evaluate the morphology of the deficient maxillary bone and to acquire 3D data for the virtual planning process (CAD).

CBCT scan (No.2):
After the surgical procedure. CBCT to re-confirm the maximum contact of the recipient bone and the allograft, and to ensure the allogenic bone block is in the desired position as confirmed from pre-surgical planning.
The timing of the second CBCT scan depended on the manufacturing process of the bone block, usually between 8 and 12 weeks after the first CBCT scan.

CBCT scan (No.3):
After 6 months, CBCT was carried out with a surgical drilling guide to estimate the available bone tissue at the surgical site before implantation.

2.3 Preparation of the block

The botiss biomaterials GmbH was responsible for the virtual design of the 3D shape of the bone block (Figure 3). For this purpose, DICOM files (Digital Imaging and Communications in Medicine) derived from the CBCT scan were transferred. 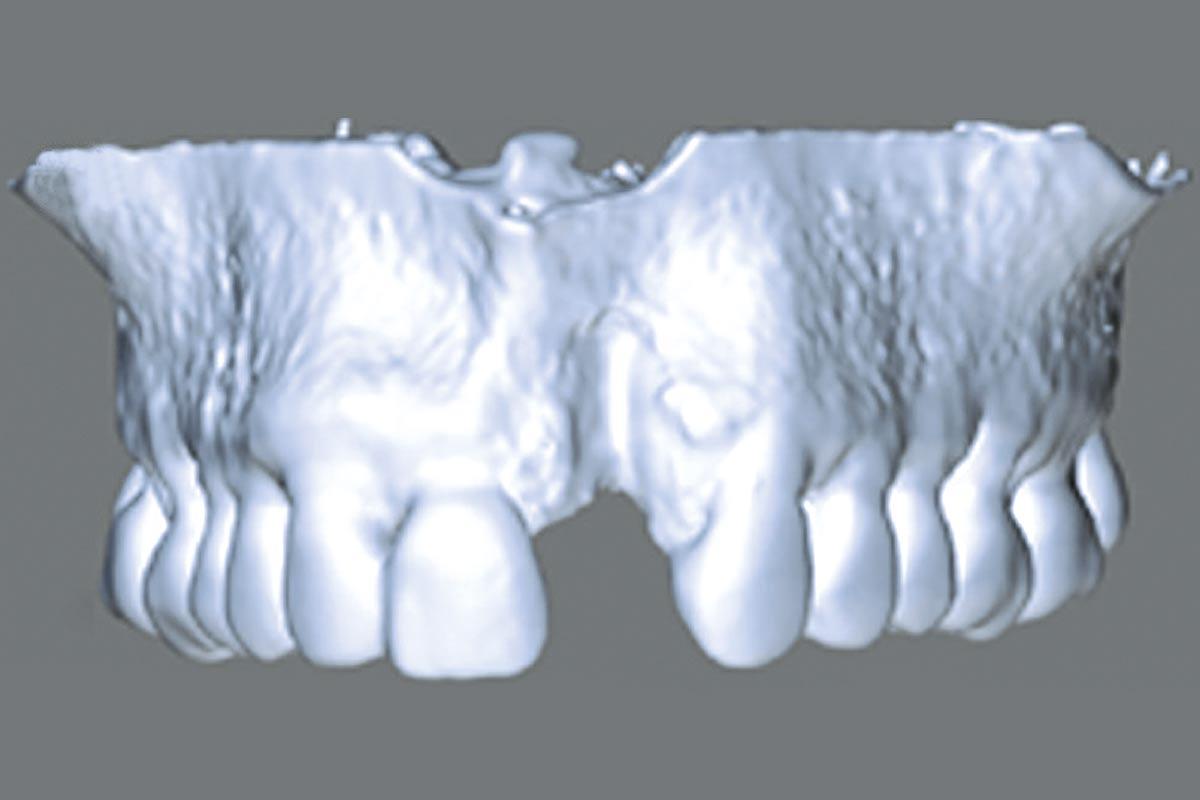 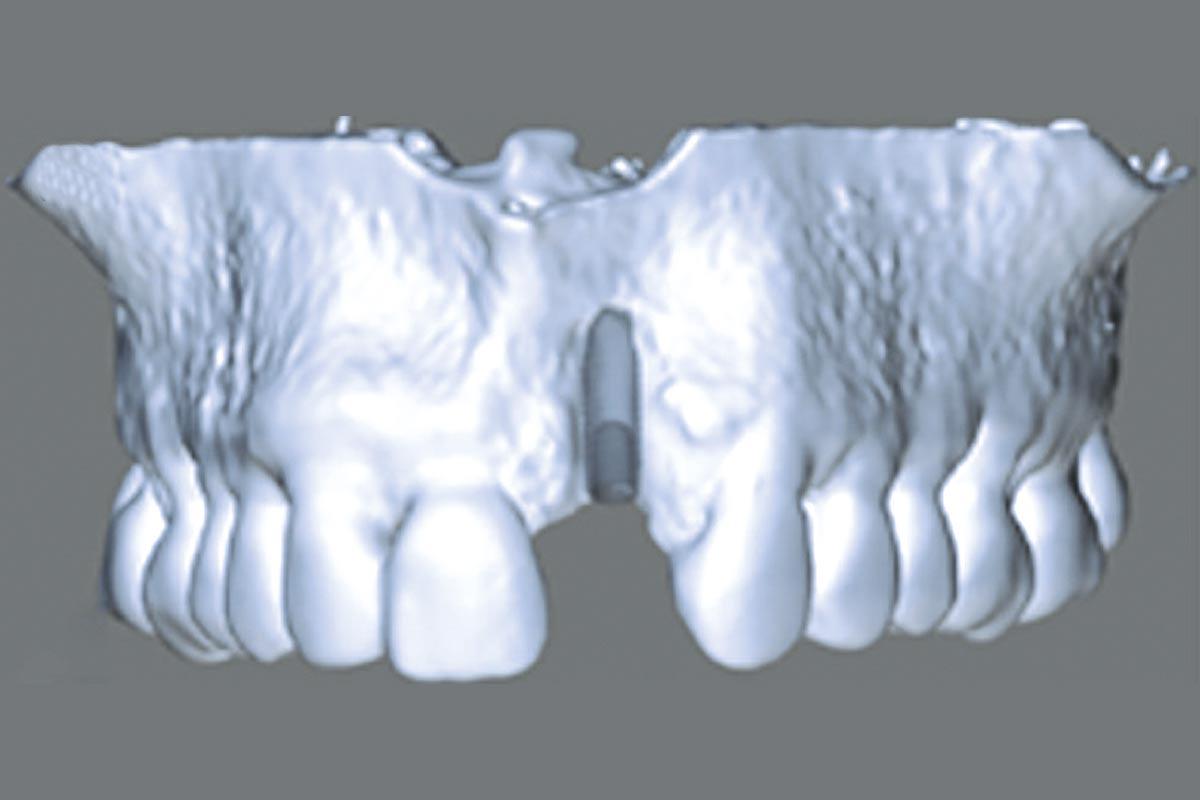 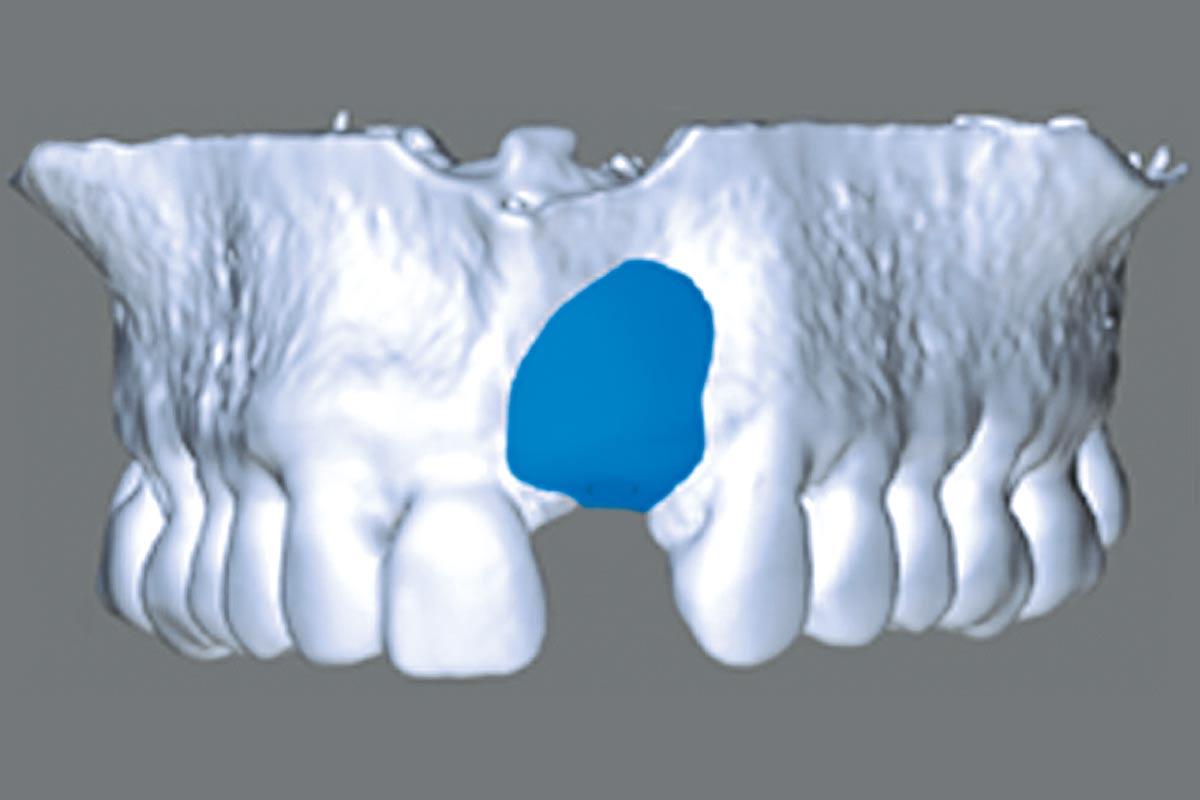 mucoperiosteal flap elevation
Autologous platelet-rich fibrin (PRF) matrices were prepared from the patient’s blood sample before the bone augmentation. Due to the patient’s wish, surgery was performed under general anesthetic with intravenous antibiotic prophylaxis of 600 mg Clindamycin. First, an incision was made with a recently developed “pillar” incision technique. For this, the incision was not made over the alveolar ridge, but 20 mm horizontally in the unattached mucosa, accompanied by two vertical relief incisions each distal to the adjacent tooth. A marginal incision was carried out on the adjacent teeth #8 and #10. A mucoperiosteal flap was elevated from the maxillary bone, leaving the mucosa covering the defect intact (Figure 4A). 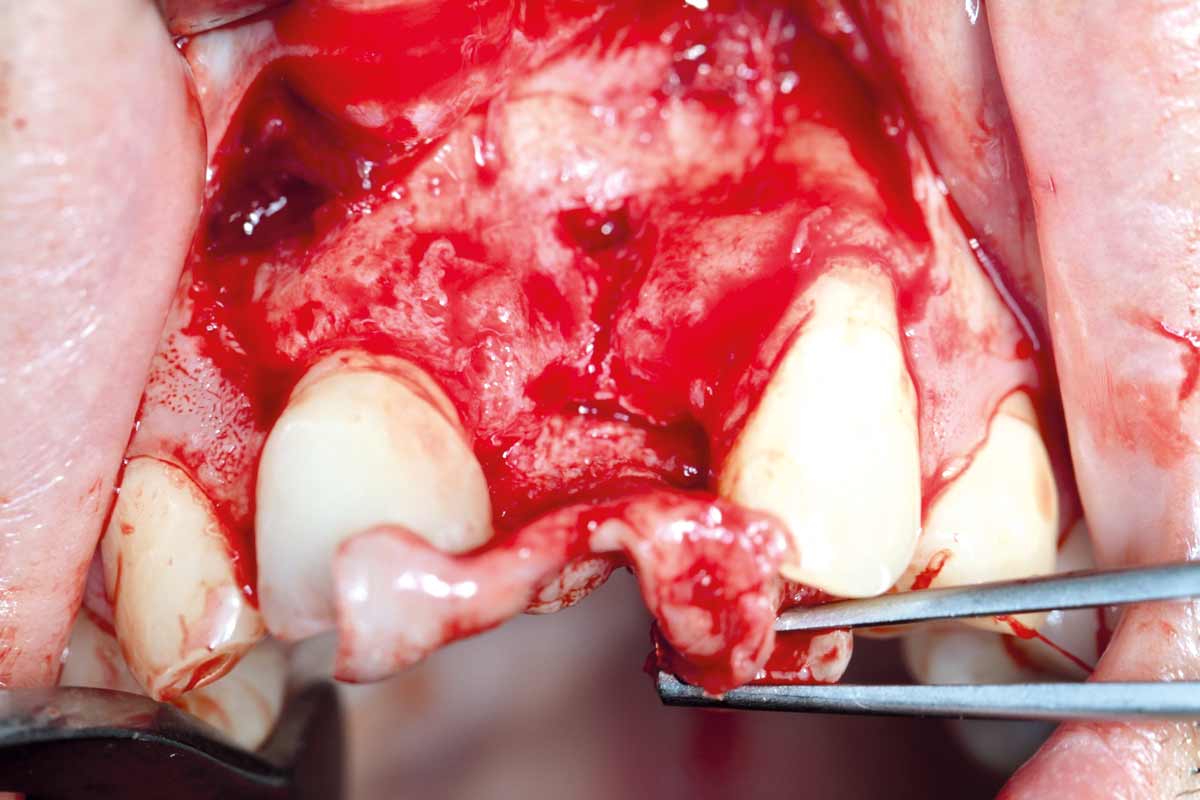 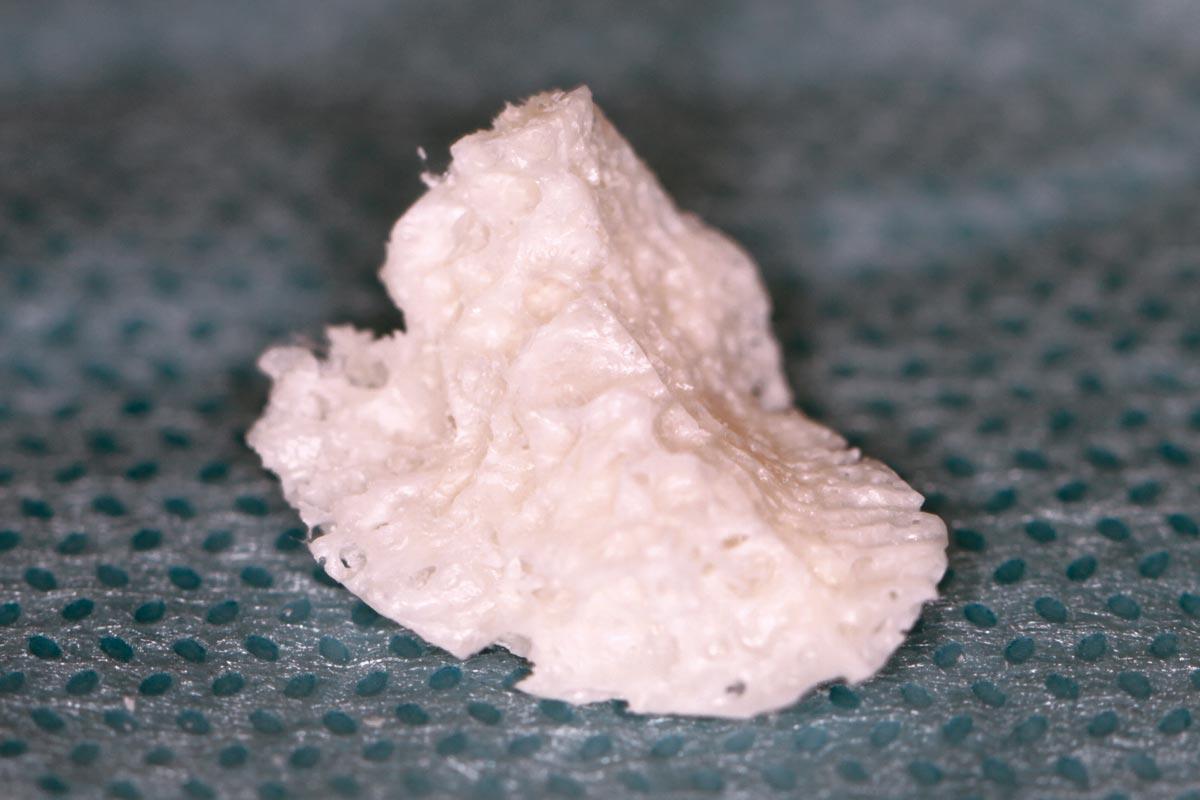 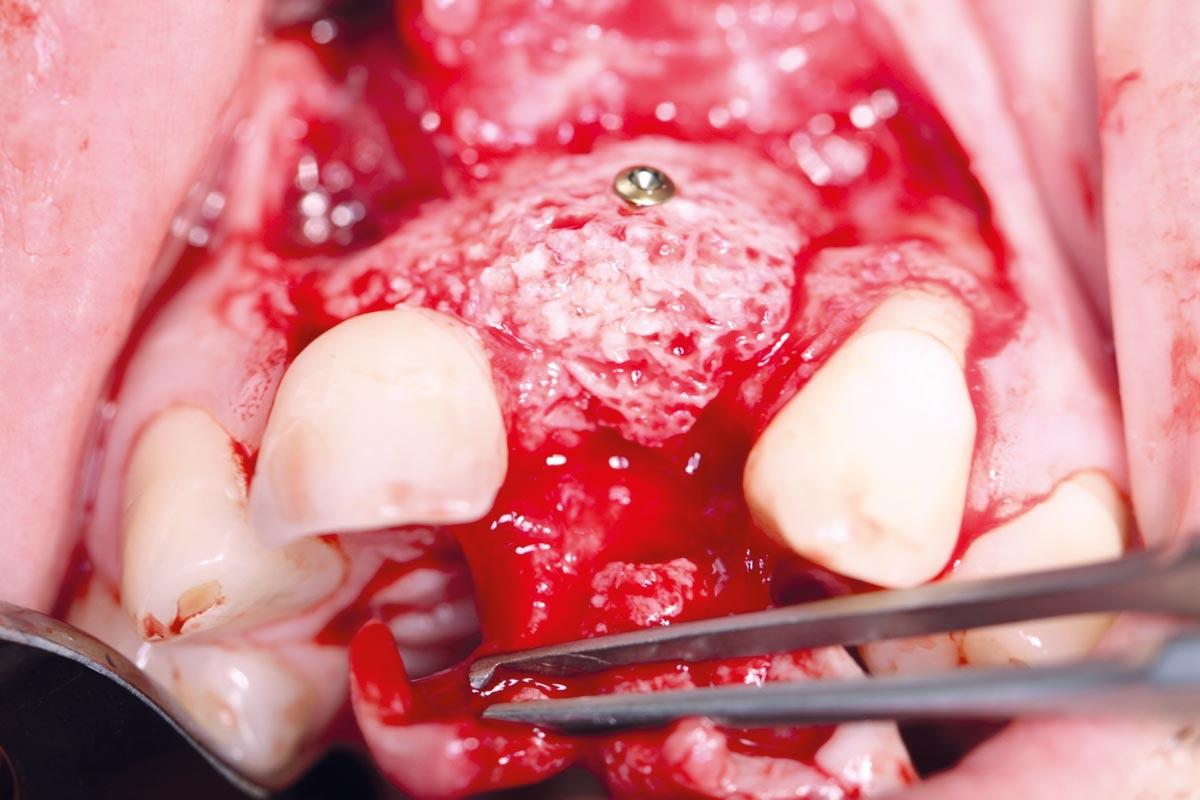 To improve graft integration, the cortical layer was perforated at various points with a diamond burr in order to deliberate bleeding. Exudate serum obtained from the patient’s blood during the PRF procedure was used to rehydrate the sterile block (Figure 4B). No further modifications were necessary because the block precisely matched the defect’s geometry. A hole with the diameter of the intended screw was drilled through the block into the bone. A single titanium osteosynthesis screw with a diameter of 1.5 mm and a length of 9 mm was used to secure the graft (Figure 4C).

After a healing period of six months, the same surgeon performed the implantation, under local anesthesia and oral antibiotic prophylaxis with 2000 mg amoxicillin (Figure 5A). This time a crestal incision was carried out to gain access to the augmented site and remove the fixation screws (Figure 5B). A dental implant (diameter: 4.3 mm; length: 11.5 mm; torque value: 50 Ncm; NobelActive, Nobel Biocare) was placed with a surgical drilling guide in position #9 (Figure 5C). The block graft appeared osseointegrated and perfused. The incision was closed with single button pulley sutures using an absorbable 6.0 suture material (Vicryl 6.0), which were left for one week. A long cone periapical radiograph was taken to verify the implant position and then was repeated following uncovering of the implant three months later (Figure 5D,E). 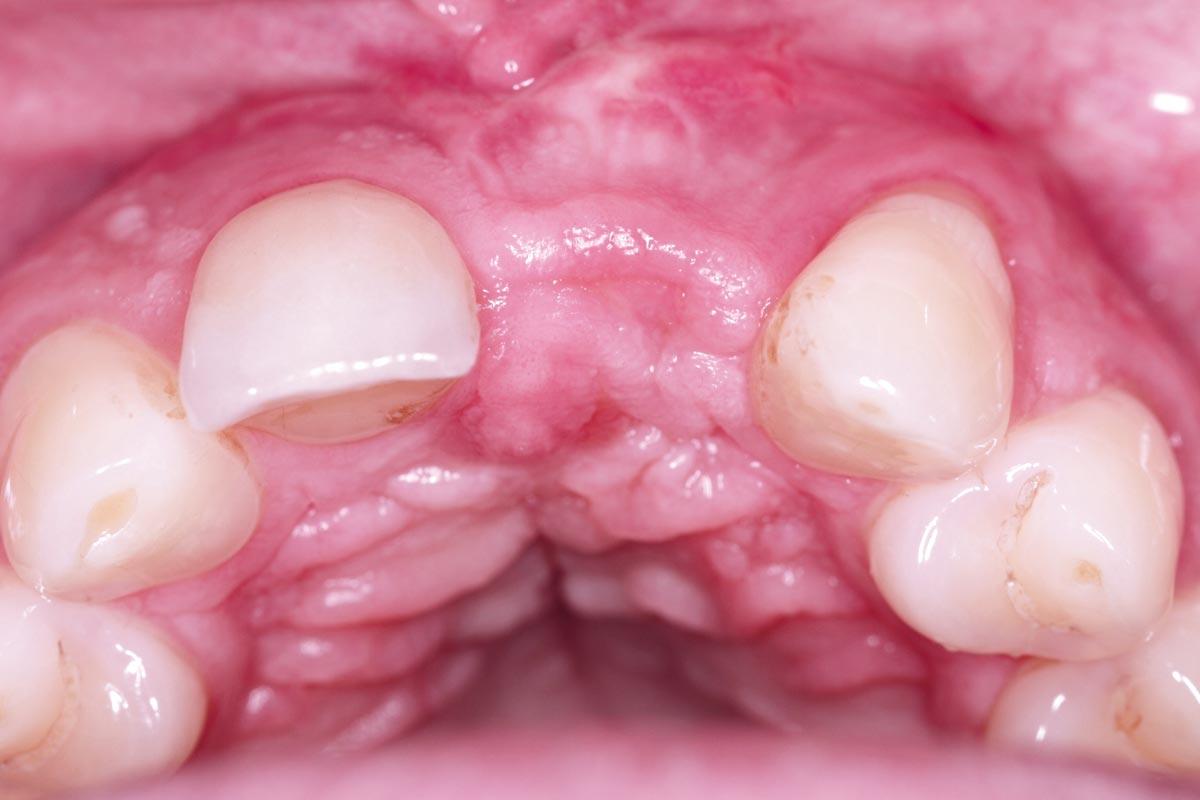 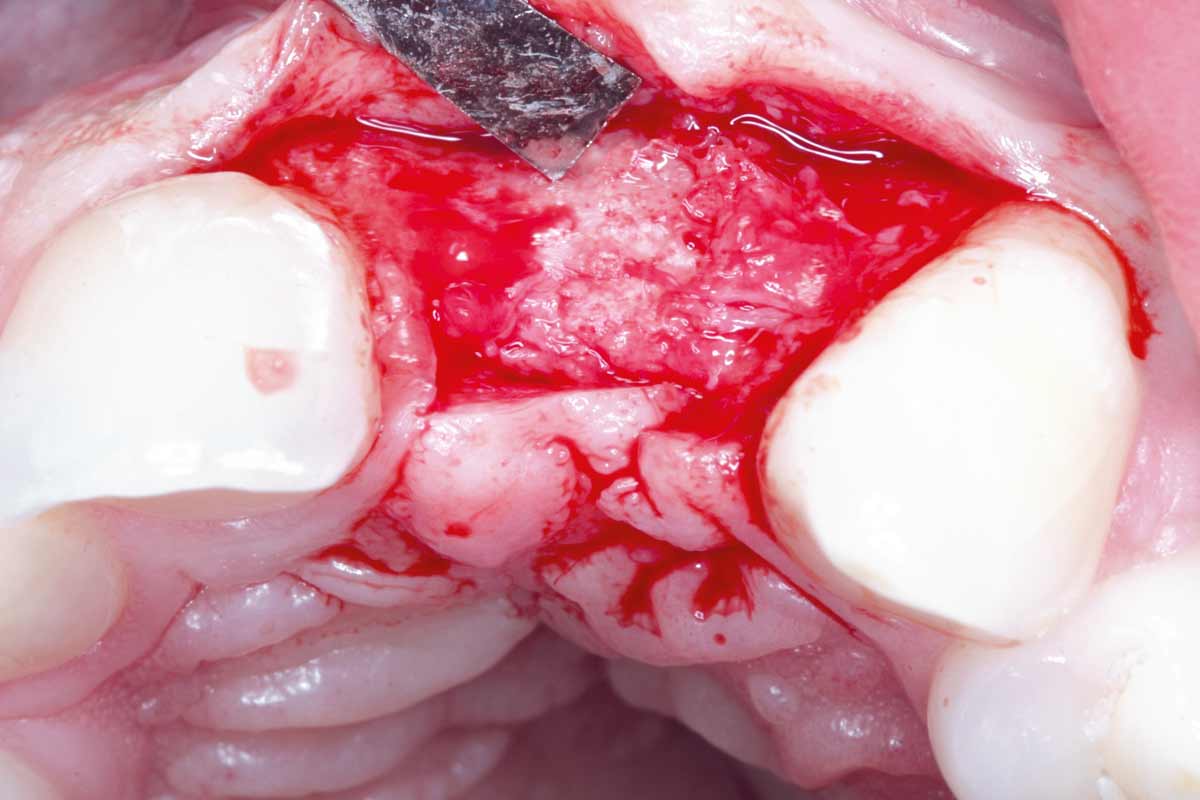 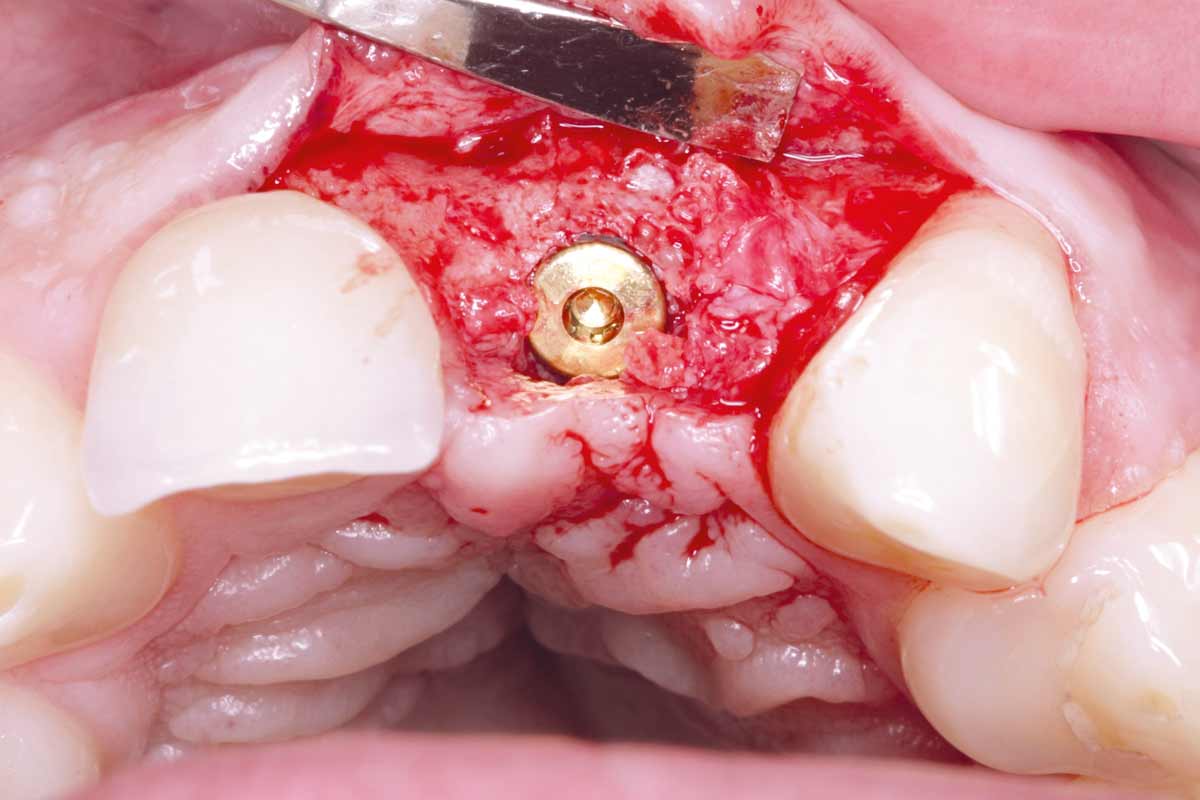 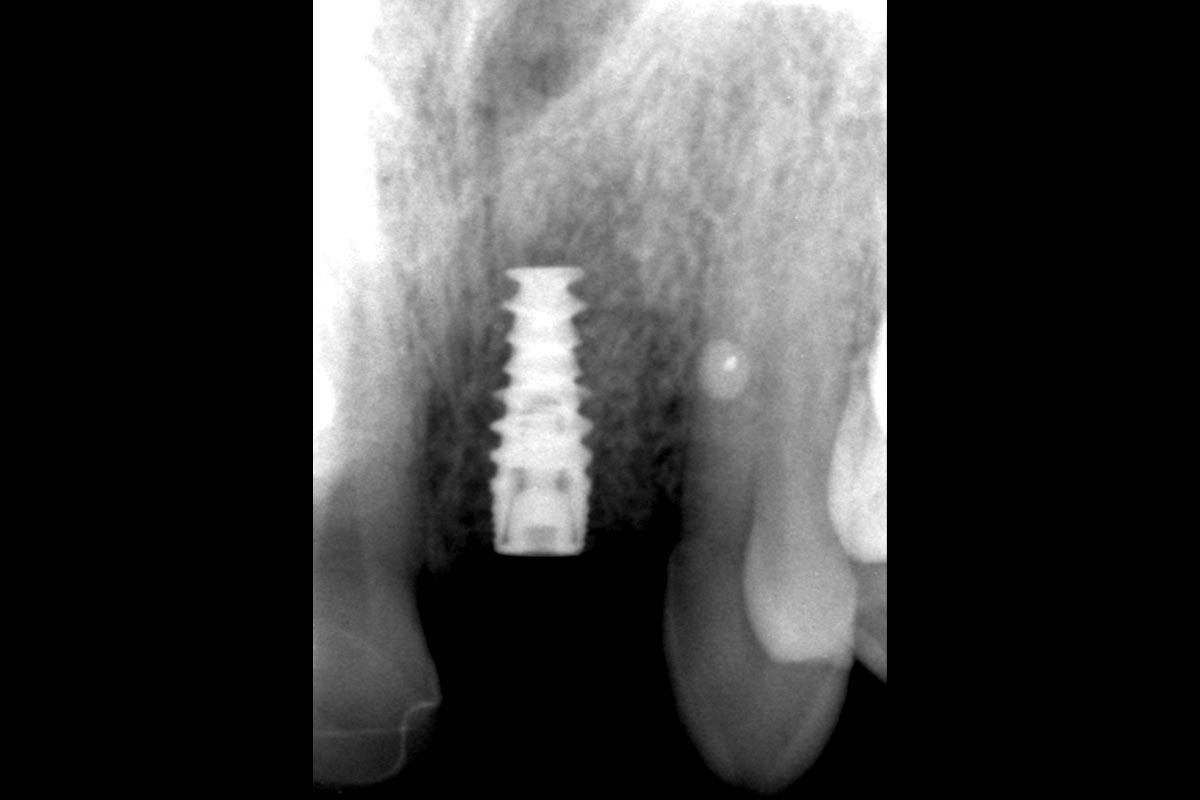 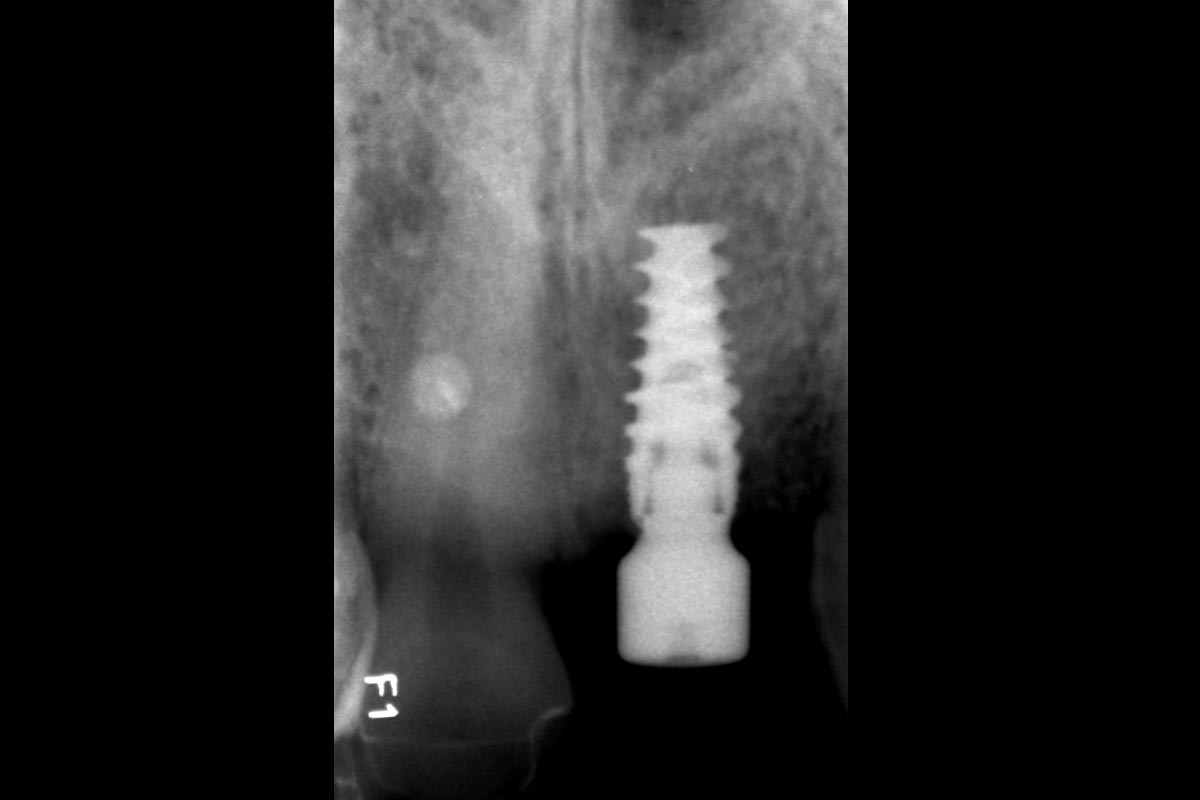 The CBCT scans were evaluated using an implant planning software (coDiagnostiX, Version 10.2.0.15659, Dental Wings Inc.,). First, a segment of the upper jaw was created from every data set to narrow down the region of interest (ROI). Individual reference points were manually selected to align the three scans to match (Figure 6A,B).
The software created virtual 3D models of the individual ROIs, which allowed the clinical scenario to be represented in three dimensions. To analyze the block volumina, coDiagnostiX® overlayed two aligned 3D models. This way the software calculated the initial block volume V1 by matching CBCT scans No.1 and No.2 and the final block volume V2 by matching scans No.1 and No.3 (Figure 6C). The volume difference (=V1–V2) gave the resorption. The block volume right after block insertion (V1) was 0,45 ml and the volume before implantation (V2) 0,34 ml, which resulted in a difference of 0,11 ml. The amount of volume lost was 24,4% of the block. 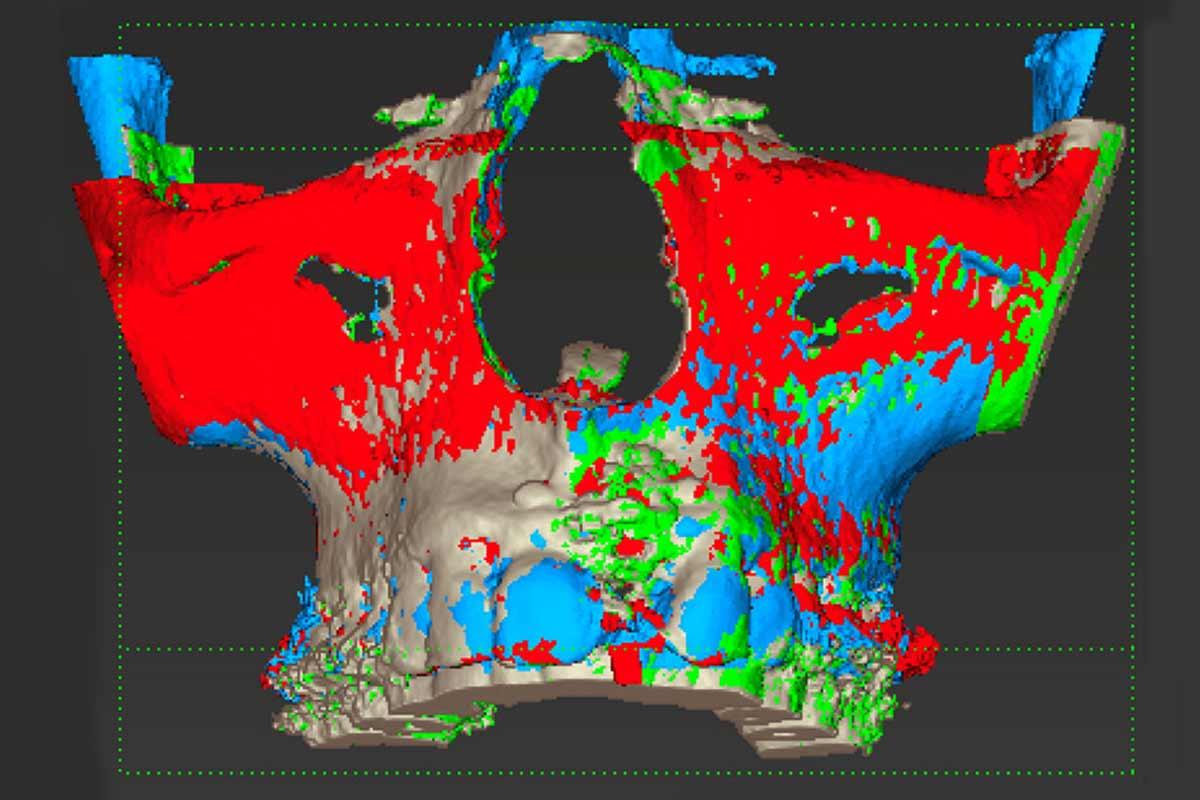 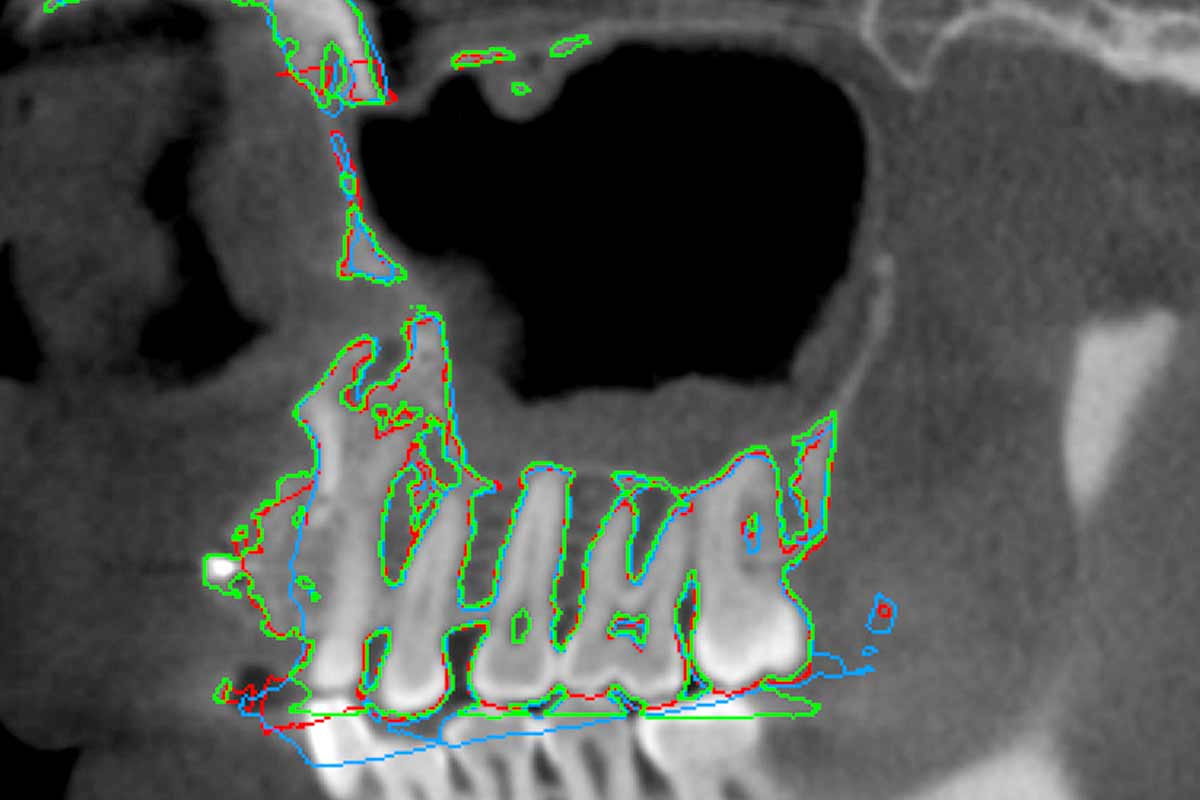 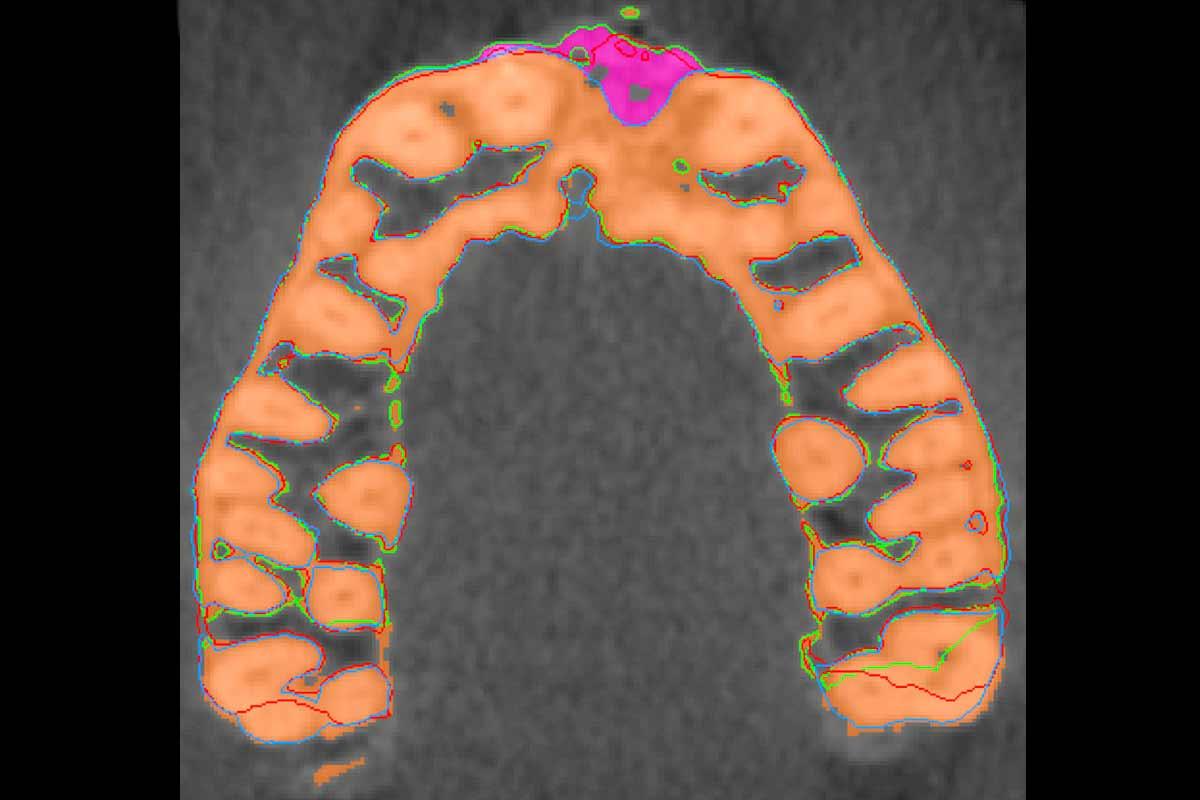 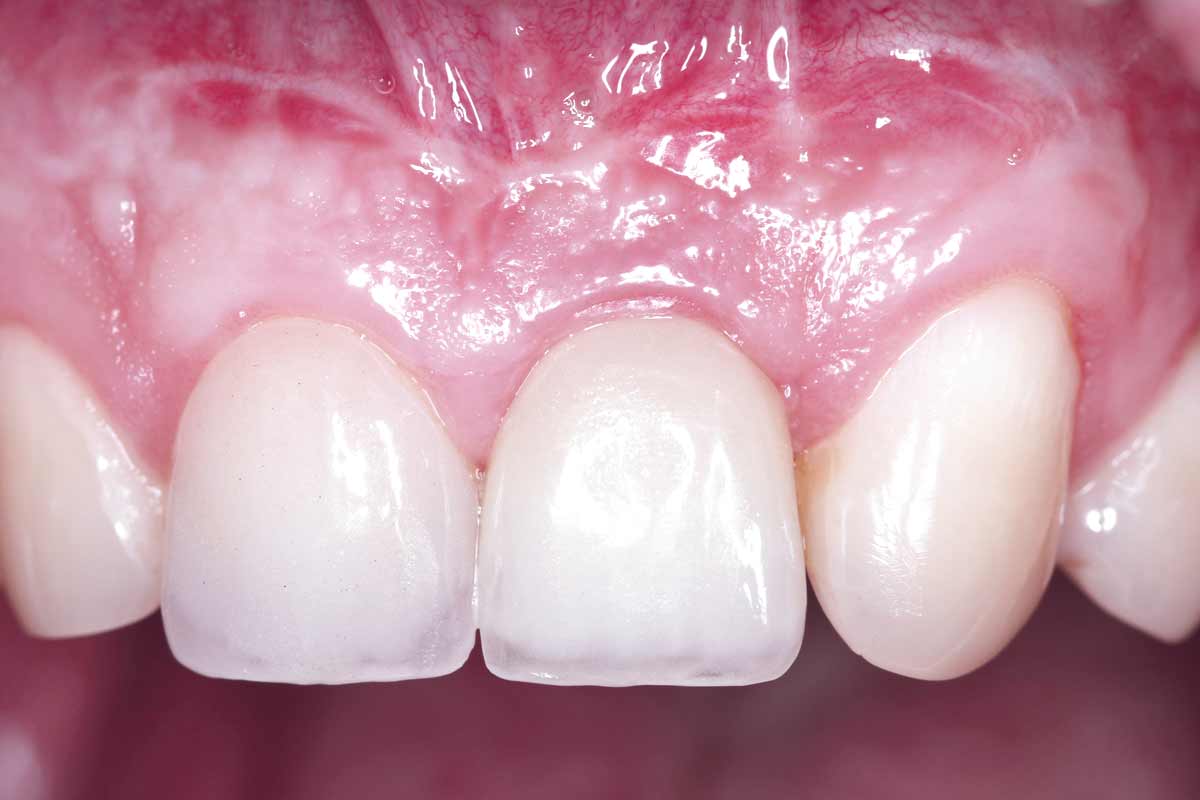 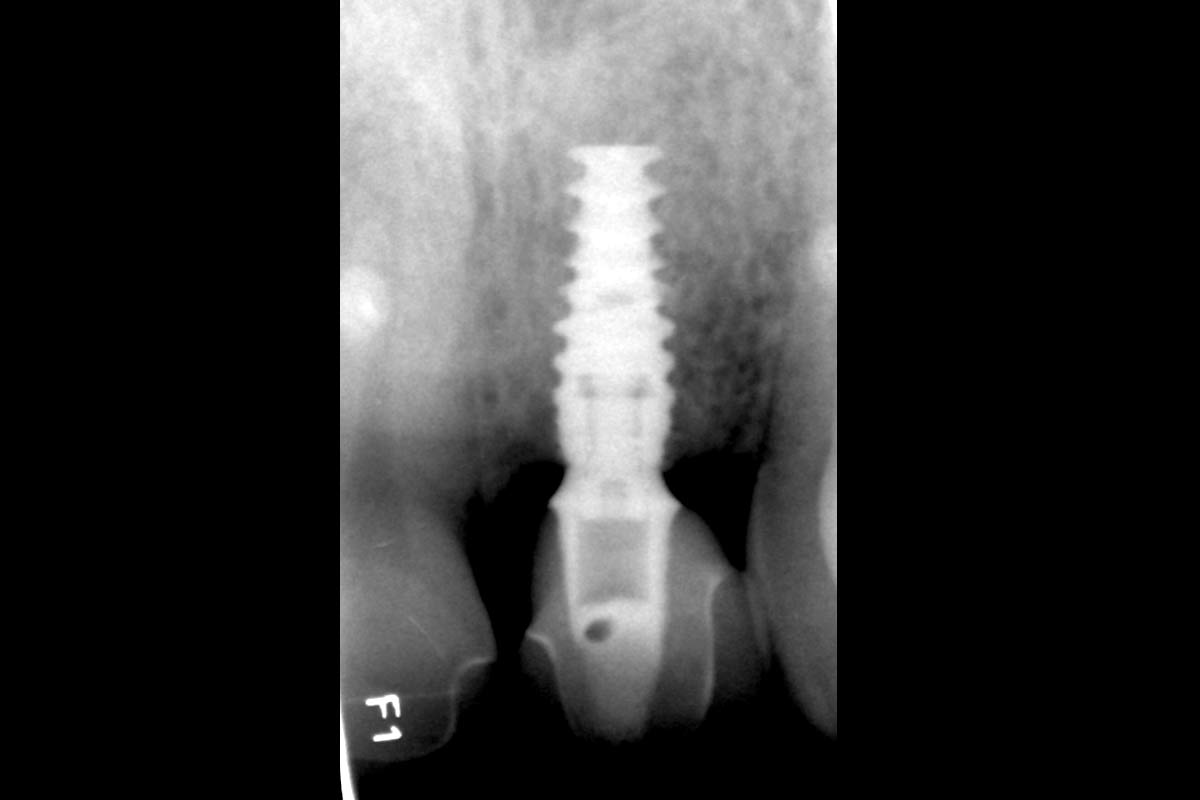 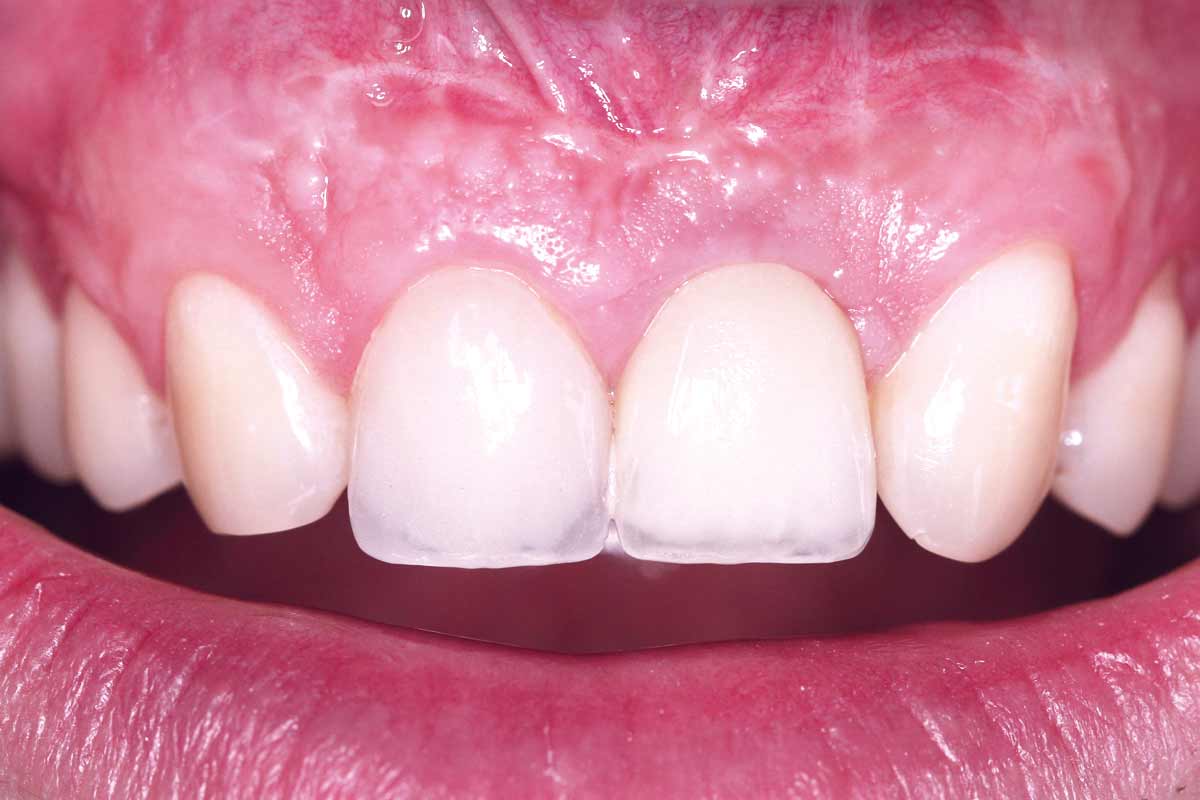 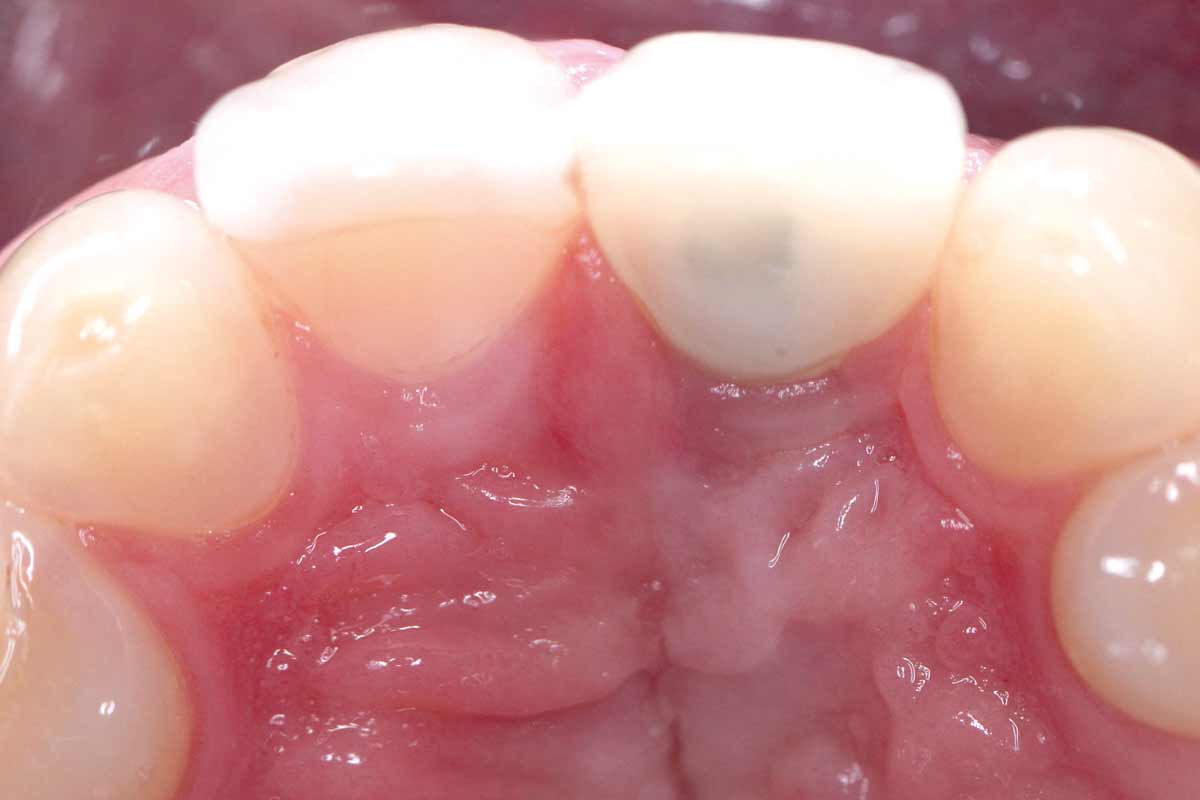 The diagnostic investigations revealed that the maximum probing depth was 3 mm, no bleeding on probing occurred and there were no signs of inflammation such as pain, purulence, or swelling (Figure 7A), Figure 8A,B,C). In addition, the X-rays showed that there were no changes in the horizontal bone height (Figures 7B and 8B). Moreover, the esthetic result was to the patients’s complete satisfaction.

The presented clinical case illustrated that the use of a customized allogenic bone block resulted in successful extensive augmentation in the esthetic zone of the maxilla.
Implantation in the osseointegrated block was possible. The application of a 3D matching approach led to a more detailed understanding of the clinical observations. Together with the six-year follow-up, a stable result was confirmed. The volume loss of the block was 24,4% during the healing period, but after implantation, the height of the alveolar ridge remained stable.
The ability to determine the volume of the block, instead of the previous vertical and horizontal measurements in 2D, allowed a much more accurate analysis of the transplant integration. 3D matching provided information on the size of the resorption, as well as on the position of the volume loss. Some volume loss below the screw head was observed. This discovery led to the insight that a countersink should be created underneath the screw head. From experience, the initial resorption of the allograft is known; for this reason, the block was slightly overcontoured during the CAD process.
A commonly associated concern with allografts is the potential for post-surgical infection. The risk does not relate to the allograft material itself, but to the handling during surgery when shaping of an allograft is required. This results in a longer operation time, which increases the infection rate of the graft and the recipient site due to the many sources of contamination during manual fitting. In contrast, CAD/CAM technology ensures a perfectly fitting block, thus reducing operation time and subsequent complications to a minimum. Moreover, the fitting process results in minimizing the distance between the graft and the recipient bone, allowing physical contact and thus ideal support for graft revascularization and rapid integration.
Insufficient soft tissue management is another reason for infections leading to perforation of the mucosa and opening of the incision line over the grafted bone. For that reason, the “pillar” incision technique was used. The soft tissue over the area of block where the tension is greatest was kept intact by moving the incision to the vestibulum, the area with highest perfusion. This reduced complications of the mucosa, such as infections and dehiscence.
Nowadays, guided bone regeneration (GBR) is widely used in clinical practice and is considered the gold standard. However, in the anterior region of the maxilla, high dimensional stability of a bone graft is essential in order to achieve esthetic results. In this case, the extent of the osseous defect was too large to ensure volume stability with the help of GBR.
More than 130 CAD/CAM blocks were inserted using the presented technique. The most common complication was dehiscence, followed in some cases by loss of the graft due to infection. The large number of dehiscences healed after refreshing the wound and the graft, and the block was successfully osseointegrated. The high number of successful cases demonstrates that individualized bone blocks made from cancellous allografts are osteoconductive and lead to new bone formation.
In this case, they enabled successful augmentation of the anterior region of an extremely atrophic maxilla and demonstrated a stable long-term result provided by data from a six-year follow-up. Nevertheless, a clinical trial with a larger patient group and long-term follow-up data is needed to validate these results and further evaluate graft volume. Finally, 3D matching proved to be a suitable method for quantifying volume changes after augmentation procedures.

We thank Sowmya Simon, Department of Orthodontics, University of Bristol Dental Hospital, for the insightful comments as native speaker, which helped improve the quality of this article. Published with written consent of the patient.

The authors declare no conflict of interest.

All subjects gave their informed consent for inclusion before they participated in the case report. The case report was conducted in accordance with the Declaration of Helsinki.

CASE OF THE MONTH 09/2022: Block augmentation in the aesthetic zone with maxgraft® and cerabone®

CASE OF THE MONTH 02/2022: Ridge augmentation in the mandible with maxgraft® bonebuilder

Complete restoration of a patient with advanced periimplantitis

CASE OF THE MONTH 08/2021: Reconstruction of maxillary ridge with maxgraft® block

CASE OF THE MONTH 09/2020: Smile rehabilitation in the anterior maxilla with maxgraft® bonebuilder